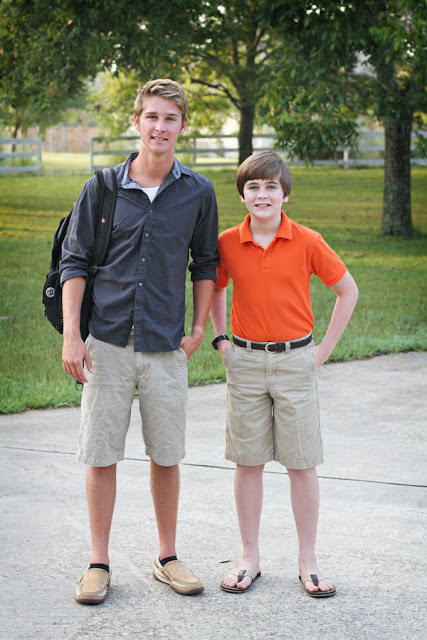 Goodness, someone is getting old... I told G-Dub this morning that HE was getting old since he had a junior in high school and his baby is a seventh grader. That whole getting older thing doesn't count for their mother. ;)
Posted by Gwen at 5:32 PM 2 comments:

Today was an Alexander and the Terrible, Horrible, No Good, Very Bad Day that would rival a Charlie Brown day!

I won't even tell you about yesterday because today tops it though I thought it was frustrating enough!

Today started rather mildly. I ran to Lowe's early and home just in time to catch Dev in a tizzy about the clock moving faster than he had thought this morning so he was rushing out the door to be at work by 10. Only, when he got in his car to go, it made the sounds of death straining to come back to life. I hopped in my car and told him to get in so I could take him to work. I came home and finished my first and foremost thing I wanted to accomplish today - installing toilet paper holder in Roo's bathroom. That was about the only thing on my list of MY things to do today that actually got done.

I jumped his car off with mine. That's a first. I've used a battery charger before, but never done the whole jump start from vehicle to vehicle. I didn't blow anything up or get covered in battery acid, so I called that one a success and marked it off a different kind of bucket list. I left the car running to "charge" while I ran in to get a shower because Devon was only working two hours before he had to be somewhere else for a lunch meeting. I took off thinking all was well. I drove his car to Water World to pick him up and take him to his next meeting place. While I was waiting for him, I turned it off real quick to see if it would start again. Bad idea. Very bad idea.... It wouldn't.

I called our youth minister since we were right next to our church and his was the only number in my phone, but he was with the youth on the white water rafting trip. He called the lead minister at our church and he came to jump us off while Alex (friend) came to get Dev and take him to the meeting. Did I mention it was 95 degrees with a heat index of near 100? I took a shower, but that was lost in the steamy car and sunshine.

My intent was to go straight to O'Reilly's and get them to test the alternator for me. The battery is brand new, having purchased it in July! I almost made it there.... Almost....... I let out on the clutch a little too much at a red light and let it go dead on me. I was in the turning lane of the west bound road to turn left and go a short distance between the divided four lane to turn right into the store parking lot on the other side of the east bound road. I had a line of cars behind me and a right shoulder across three lanes if I could have just turned left! I let off on the brake just a bit with the clutch in and noticed it roll. I had visions of letting it coast across those lanes of traffic and land on the other side without getting hit! As the light changed with the left turn signal arrow, I eased my foot off the brake to see what would happen all while the flashers were going and the truck behind me was getting a lesson in patience. God's hand must have been on that car because it coasted across the lanes of traffic and to the right lane where I pulled off the shoulder.

I had just been on the phone with O'Reilly's making sure they could check the alternator for me. So, sitting on the side of the road staring at their front door that was fifty yards in front of me, but seemingly impossible to reach, I called them back. The girl said they were covered up at the moment and put me on hold. Meantime, I was sweating in that car. Did I mention it was hotter than HAWT! out there? I got out to walk across the street and this lady in a Mercedes wouldn't let me... She stopped and told me to get in her car and she'd drive me across. So, I did. She was so much nicer than I probably would have been. I should take lessons from her. She gave me her name, told me where they lived which was close by and told me her husband's name, stating they were in the book and I should call her back if I needed a ride anywhere else! I got in the store and the girl said, "He just left to go jump you off." So, I walked back out and across the busy intersection to wait for him to come jump me off. It was stinking hot inside a car in with no AC in south Alabama in August. Why had I taken a shower earlier? I was going to need another one. Probably five/ten minutes later, he showed up..... felt like an hour or more. LOL He jumped me off and I drove it to O'Reilly's where he brought the machine out to test it for me. Yep, alternator is going bad. Fun times.... I drove it home and parked it. I am going to put the battery charger on it and wait it out. It would cost $500 to have it done. Or buy an alternator and wait for Gary to do it for $150. (I just parked my car in May and waited for him to replace the alternator on it! Geesh!)

I've had two Dr. Peppers and a venti Chai tea latte since. At least, it's not alcohol! And, they did make me feel better! I'll do better tomorrow if I am not catching the next flight to Australia (Children's book referenced above)

Roo and I were talking earlier tonight about the whole experience and talking about that lady in that Mercedes. He said, "I bet that Mercedes felt really good after sitting in that hot car." I said, "Yes, it did! She had the AC cranked on high!" He said, "Probably felt like heaven!" LOL
Posted by Gwen at 11:41 PM 1 comment: