Is there an echo in here?

Or is anyone around?

The month of March hasn't been anything out of the ordinary, I just haven't been blogging much. I will blame it on spending too much time on my iPad and not actually sitting in front of the computer. Yes, I know there are Blogger apps and other things, but I haven't taken the time to figure those out exactly.

To catch you up a bit, I'll share a couple of happenings throughout the month of March since it's almost over!

We are moving (again!) this summer. Such is the life of a military family. Hopefully, this next move will be it for a while! We'll see how that holds true. G-Dub found a house on a recent trip and we are set to close on it next month. I'll be co-owner of a house I've never seen, and will move into it in June! Yikes!

It sits on four acres and has a grove of pecan trees. It all seems very southern, doesn't it? I believe so. I told G-Dub and some friends recently that we'll have to nickname it 'The Grove'. A friend piped up that The Nut House might be just as appropriate. LOL We'll see. Maybe we'll be The Nut House in The Grove. :)

I've been perusing Pinterest and adding to all of my boards with home ideas, storing away thoughts and visions for what we might can do in our new home. One day recently, I saw a pin on Pinterest that spoke to me. 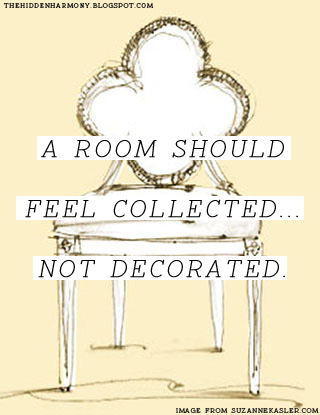 That reminded me of all the things I've collected in various places we've lived and how while they work for the homes we've resided in, they may not always work in each one. It'll be interesting to decorate with our collections in this new home!

Speaking of collections, I collected something else last week with visions of it sitting in the "formal" dining room of the new house. Nothing I do is formal, so the dining room won't be. I am already planning to put my farm table in there as it's the eat in space that will fit the table. That alone disqualifies the room for formality in my point of view.

I've been wanting a larger china cabinet/hutch to store my china and just to have. I wasn't sure exactly which style I wanted, but I knew I wanted to buy second hand and cheap inexpensive in case I change my mind next year! I found one on Craigslist and we went to pick it up last Thursday. It was straight out of the 60's with the gold etching on the glass and the golden brown color.

I got busy fixing correcting part of that with a little steel wool and girl power.

Here's a snapshot with three out of the four doors and their naked glass. Looks ten times better just like that!

Now I just have to decide if I truly want to paint it.
I have all these hutches pinned to my Furniture Fun Pinterest Board.

I really WANT to paint it!!


G-Dub isn't convinced it needs painting though, but said I could do whatever I wanted to. My parents have already said, "I wouldn't paint it!" "You'll take away from its value." MIL said the same things. Um, who's it valuable to? It's owner? Well, did I mention how much I paid for it? Forty five dollars. Yep, you read that right, $45. How would I devalue that? I'm still debating as it sits in this current dining room with my dishes already loaded into it. My old self would say "You're parents are right, you shouldn't paid perfectly good wood." My new self says, "You know that's not antique wood, it's perfectly ok to paint it and give it your custom look!" I just can't convince myself to do it now before the move especially since it's already loaded and the movers may scratch my paint job! But, making it my spring project before the move sounds like a perfectly good thing for the Head Nut of the Nut House in the Grove to do, right? ;)

Several years ago when we lived in Kansas, we were part of a homeschool group. This group was just getting started and didn't do a ton of things at first. We took swim lessons with them on post. At one point, they started an art class every Friday after swim lessons with some elementary education majors from KState University.
One week, they boys worked on watercolor paintings. The student teachers taught them the "proper" way to use water colors.
When the paintings were done, I stored them away in a To Keep folder. I had thought of framing them at some point and hanging them in the basement or the boys' rooms. Then we moved to Korea and then back to the states. I'd sort of forgotten about the watercolor paintings.

Fast forward to a couple of weekends ago when we had some plumbing issues and a leak in the basement. After all that was cleaned up, I was down there going through some of my things to make sure nothing was damaged that I'd missed. I came across the watercolor paintings! They'd been rough cut out of larger watercolor paper so they weren't the same size. I spent some time measuring and getting them cut to the same size. I had the thought again that I needed to find frames for these or have them framed. I hate having things framed because I'm cheap frugal. I put the artwork back into a its special storing spot
(which means I really just tucked them back into a space where I could find them easily, but that they were safe.)

I proceeded to forget about them after that. No excuse. Just not a priority after being in storage all this time!

Yesterday morning, I was watching Cash and Cari on HGTV. They found some artwork that was actually worth some $$. It reminded me of the artwork and frames that I've seen at a local thrift shop. Last summer I bought a print in a really nice frame that I then proceeded to paint over with chalkboard paint and hang in Teen's room. Um, hopefully that are wasn't worth anything! LOL (I actually looked it up on ebay before destroying it!) I don't go in that thrift store often because I'm not usually in that area. But, I needed to go to Lowe's and one of the local Lowe's stores isn't too far from that thrift shop. So, I decided to head that direction and just look around.

I went over to their frames and prints, but nothing really stood out. Drats. Then I picked up one of two frames they had there. They were oblong and originally from IKEA.

My forgetful brain immediately pulled the watercolor artwork to front and center. At that point, I wanted to give myself a nice forehead slap for not actually measuring the artwork and putting those measurements into my phone. They had a couple of nicks, but they glass was intact and overall, the frames were fine.
The price tag on each of them read $2.99.

Hey, it was worth the gamble.

I bought them and brought them home. I went into the basement and pulled the artwork out of their safe storage, then give myself an imaginary in my head high five because they fit perfectly! I cleaned them up with Windex. I took some black craft paint and touched up the nicks, then smoothed it over. I need to go over the new paint with finishing wax to make it shiny like the rest of the frame. I just didn't do it before snapping the photos to share!

I need to figure out what I'm going to do with them now! They've been laying on the table since last night. I stop and admire them every time I walk by!